Many upscale restaurants that catered to the nation’s downtown office crowd are canceling the meal, as remote work persists and business deals are sealed online.

Midday at Leila, in downtown Detroit. The Eid family opened the restaurant in 2019, in part to serve lunch to downtown office workers. It closed for lunch at the the start of the pandemic, and may never serve it again.Credit…Emily Elconin for The New York Times

WASHINGTON — Few people understand the power lunch better than Ashok Bajaj. The restaurateur began his career here in the waning days of Ronald Reagan’s presidency, when he opened the Bombay Club a short walk from the White House.

Eight of the 10 restaurants he operates today are, like his first, located downtown. They’re conveniently clustered near one another, making it easier for Mr. Bajaj to preside over multiple dining rooms, and near customers who work on Capitol Hill, at the State Department and in the Eisenhower Executive Office Building — crucial sources of what Mr. Bajaj calls his “lunch crowd.”

Prominent members of that crowd gravitated to the Oval Room, the power-lunch magnet he ran for 26 years — and closed in November 2020. Longtime regulars have resumed eating lunch at his places that are open for it, like Rasika and the Bombay Club. But “it’s nothing like it was before Covid,” he said. “The energy has been sucked out of downtown.”

Of all the headaches the pandemic has caused the restaurant industry, among the most persistent is the disruption of the business of doing business over lunch. It afflicts a specific, influential cohort of restaurateurs who, like Mr. Bajaj, own prestigious restaurants in the hearts of large cities that office workers have fled. 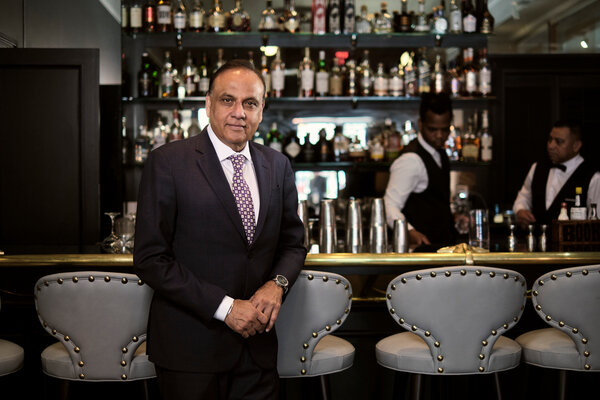 Continued uncertainty over when or if those workers will return leaves the dining rooms that catered to them without an important revenue stream at a time when the cost of doing business, particularly in dense urban areas, is spiking. At the same time, many of the diners who used to nurture relationships and close deals over midday hamachi crudo and steak frites are now making those connections in front of a computer screen at home while eating salads from takeout boxes.

These economic and behavioral shifts are heightening concerns about the viability of independent restaurants in big cities, where they double as bulwarks against the homogenizing effect of corporate chains. “The Cheesecake Factory Will Open March 30 in Downtown DC and People Are Freaking Out,” blared a headline on the Washingtonian website last year, atop an article reporting the replacement of an award-winning chef-owned restaurant.

In an apparent nod to the new reality, Mr. Bajaj opened a grab-and-go place, Bindaas Bowls and Rolls, downtown in April. Not long ago, a quick-service pit stop would have been unimaginable coming from a restaurateur known for his savoir faire and designer suits.

“It just seemed like the right time for it,” he said. “There are not that many people doing power lunches right now.”

In less-fancy dining rooms across the country, the restaurant lunch is thriving, particularly in the suburban and residential city neighborhoods where many Americans have worked during the pandemic. Total sales at quick-service restaurants have exceeded those at table-service restaurants since the start the pandemic, upending a historical norm, according to the National Restaurant Association. And fast-casual chains have continued opening in cities like Washington and San Francisco.

But a number of independent city restaurants that used to do brisk noontime business are remaining closed for lunch, even as demand for dinner reservations returns. Many operators say rising costs and labor shortages make lower-priced lunch menus near-certain money losers.

Nancy Oakes, who opened Boulevard in the Embarcadero area of San Francisco in 1993, said the return of office workers on staggered schedules — say, three days in the building, two at home — has been too unpredictable to justify hiring and training staff for the midday meal.

“With this hybrid workday, is Wednesday the new Monday, or is Thursday the new Friday?” Ms. Oakes asked. “If I can crack that code, I might have a chance.”

Most of the high-end restaurants struggling with the shifting economics of lunch are in cities that experienced record job growth in the decade after the Great Recession of 2008, said Hudson Riehle, senior vice president and director of research for the National Restaurant Association. “That economic expansion,” he said, “stimulated the development of more restaurants, in particular independent operations that catered to the city worker crowds.”

Recent numbers, however, don’t augur a quick return to pre-Covid conditions. Some 47 percent of diners who work from home go out to lunch less frequently than they did before the pandemic, according to the restaurant association.

Lunch reservations in the first four months of this year at restaurants with an average check of more than $50 were sharply lower than during the same period in 2019, according to data from the online reservation service OpenTable. They fell in Washington (by 38 percent), New York City (38 percent), San Diego (42 percent), Philadelphia (54 percent) and Chicago (58 percent).

Joel Johnson has noticed the change. The head of government affairs in the Washington office of FGS Global, a strategic communications company, Mr. Johnson, 61, averaged three business lunches a week before the pandemic.

The ritual was so deeply ingrained, he said, that “between 12-ish and 2-ish, no one would schedule a big client meeting. It was understood that people were probably going to lunch. That got torn down during Covid.”

The downtown lunch business hasn’t come to a complete halt. “Some days are good,” Mr. Bajaj said of his restaurants that are open for lunch, noting that Ketanji Brown Jackson lunched at Rasika, his modern Indian restaurant near the Capitol, soon after being confirmed to the Supreme Court in April.

The chef Eric Ripert said lunch at Le Bernardin, his celebrated French restaurant in Midtown Manhattan where a prix-fixe lunch runs $120, is at “100 percent capacity,” although the same can’t be said of the nearby Aldo Sohm Wine Bar, which he co-owns. Lunch service has not resumed at similarly celebrated and high-priced Manhattan restaurants like Per Se, Eleven Madison Park and Jean-Georges.

Lunch on a Wednesday in June was busy at Higgins, an influential restaurant in downtown Portland, Ore. Greg Higgins, its chef and co-owner, said he had worked hard to attract midday diners — but also benefited from a spate of closings nearby.

“The hotel restaurants are gone,” he said. “We’re one of the only options now.”

The story for suburban restaurants has been nearly the opposite of downtown’s, said Mr. Riehle of the National Restaurant Association.

The Detroit-area businesses run by Samy Eid’s family illustrate the split screen. “We reopened for lunch as soon as we could at Phoenicia,” said Mr. Eid, referring to their traditional Lebanese restaurant in Birmingham, a suburb. “It’s back.”

Leila, in downtown Detroit, is another matter. The Eids opened the modern Lebanese restaurant to critical acclaim in 2019, in large part to take advantage of the demand for lunch at a location about three blocks from the headquarters of Quicken Loans.

“I don’t know if lunch will ever come back to Leila,” Mr. Eid said. “It’s a multimillion-dollar project. To say it makes more sense to keep it dark tells you what you need to know about how crazy things are.”

In the short time Leila was open for lunch before Covid arrived, Katy Cockrel said she was in the restaurant so often that the staff “joked that I was parked at the bar at noon and would still be there at 3.”

Ms. Cockrel, 37, who is the vice president of communications at StockX, said she treats restaurant dining rooms as daytime work spaces. “People just kind of walk up and chat,” she said. “If I can have that with good food being a part of it, why not?”

The pandemic intensified challenges that had long bedeviled big-city restaurants, many owners say.

Pinched by rising costs and a generational shift in dining habits evidenced by the number of fast-casual chains in downtown San Francisco, Ms. Oakes said she nearly closed Boulevard in 2019. A partner in an investment firm with offices in the same building persuaded her to stay open, and helped with lease negotiations.

Today, lunch reservations at higher-priced restaurants in San Francisco are actually up 15 percent compared with 2019, according to OpenTable. But in that time, Mitch Rosenthal has closed three of the restaurants he owned there with his brother, Steven. All were near the offices of tech companies like Facebook and Salesforce.

Their remaining restaurant, Town Hall, is in the same neighborhood. (Bjorn Kock is a partner in the restaurant.) It’s busy for dinner but may never reopen for lunch, Mr. Rosenthal said. Lower-priced lunch menus make it nearly impossible to turn a profit in San Francisco, he said.

“I’m paying cooks $25 an hour,” he said. “Do I think they deserve it? Yes I do. Does it mean the restaurant can be profitable? That’s a different story.”

By the time Marea, an Italian restaurant in Midtown Manhattan, fully reopened for daily lunch in February, its owner, Ahmass Fakahany, noticed the pandemic had changed diners’ demeanor.

The restaurant is known for its Michelin star and affluent customers. Mr. Fakahany, a former co-president of Merrill Lynch, said Marea’s slightly simplified new lunch menu suits the mood of business customers who have already used video conference calls to settle tense matters they once handled in his restaurant. Those diners now look to lunch to deepen relationships.

“I’m seeing a lot more people reconnecting, at a slower pace,” he said. “People used to use the term power lunch. It’s becoming more of a social-impact lunch, after all this time on Zoom.”

Dirk Van Dongen retired as a Washington lobbyist in early 2020 and moved to Florida. He is still connected enough to have experienced what is lost when people no longer meet face to face.

Mr. Van Dongen said he ate most of his lunches and half of his dinners in sit-down restaurants in his more than 50 years in Washington. It’s how he built his business relationships, he said, with people he wanted to work with as well as those who could eventually become adversaries.

“But let’s still get to know each other as people,” he said. “You can only do that when you can look each other in the eye.”

Mr. Bajaj has yet to open La Bise for lunch. As he waits for the right moment, he has developed a new routine: visiting a local parking garage, hoping to discover it full of cars — a sign of life returning to downtown.