As the perils of cooking with gas become more apparent, there’s ever more reason for cooks to turn to these flameless, easy-to-clean ranges.

Robert Osborne grew anxious about dinner when his Brooklyn co-op board put the kibosh on a plan to move a gas line for his kitchen renovation. How could Mr. Osborne, a math teacher, cook his favorite dishes like skillet chicken with caramelized mushrooms and onions if he couldn’t do it over the classic blue-orange blaze of a gas stove?

Like many of the more than 40 million home cooks in the United States with gas stoves, Mr. Osborne considered his to be essential, a nonnegotiable part of his kitchen that, had it not been for the co-op board, he would have kept.

After all, cooking over the open fire of a gas stove sparks something primal and intuitive in our lizard brains. Watching flames leap over the sides of a pan and lick the bone of a sizzling lamb chop is visceral and sensual, two adjectives you might not associate with the sleek ceramic surface of the Samsung induction range Mr. Osborne ended up installing instead. 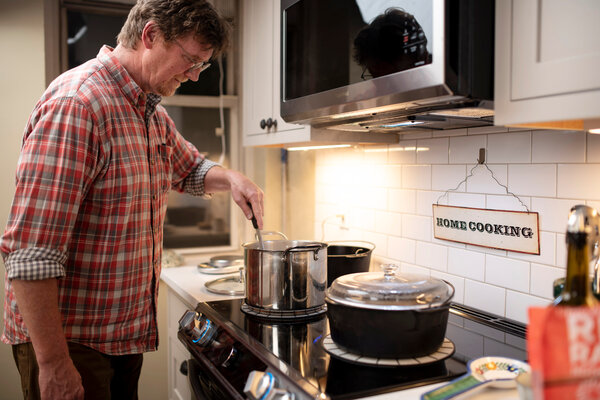 But for all the sexiness of cooking with gas (a concept bolstered by aggressive lobbying and advertising from the natural gas industry), it has been shown to be catastrophic for the environment, emitting potent greenhouse gases like methane into the atmosphere. Worse, a recent study demonstrated that 75 percent of these emissions occur when the stove is off.

The noxious fumes that get trapped in our homes are also harmful, especially for children.

Brady Seals, a manager at RMI, a nonprofit focused on sustainability, and an author of a study examining the health effects of gas stoves, said indoor nitrogen dioxide levels can spike quickly, reaching hazardous levels in the amount of time it takes to bake a cake.

So just as someone might want to quit smoking, there’s a strong case to be made for kicking the natural gas habit.

Happily, there is induction, which uses electromagnets to efficiently heat cookware without the inherent pollution of fossil fuels like natural gas.

While induction stoves may have far less lizard-brain appeal than gas, the latest models gain in unmatched power, precision and responsiveness. And, as anyone who routinely bubbles oatmeal onto the metal hob of a gas stove will be thrilled to read, cleaning the smooth cooktop of an induction range is an absolute breeze.

There is, however, a learning curve. It took Mr. Osborne a few weeks to get comfortable wielding his beloved cast-iron pans on the new, suspiciously cool surface.

“I had to adapt to the mental process of looking at a number instead of a flame,” he said, referring to the stove’s digital display.

Eventually, induction’s speed, finesse and how it kept his kitchen cool won him over. His skillet chicken has never been better.

Although induction technology has been around for decades and is established in Europe, it has yet to catch on extensively here. According to Consumer Reports, induction cooktops and ranges are installed in only under 5 percent of homes in the United States.

This figure is likely to increase as New York and other cities across the country enact legislation limiting gas hookups in new construction. In luxury buildings, induction is not only seen as more efficient and functional than regular electric stoves — the kind with the red-hot circles that always smell like scorched milk — but it’s perceived as more upscale as well. And the New York City Housing Authority, or NYCHA, in partnership with WE ACT for Environmental Justice, has initiated a pilot program to install induction ranges in apartments to help NYCHA meet its city-mandated sustainability goals

But induction stoves are expensive. Starting around $1,000, they’re twice the price of a basic gas range. Still, industry experts agree that, as demand increases, prices will fall.

Rachelle Boucher, the owner of Kitchens to Life, a California consulting company that helps cooks electrify their kitchens, said that even as prices for induction stoves begin to come down, she’s seeing quality improve by leaps and bounds.

The newest wave of products, she said, incorporate nuanced technology that allows you to set and maintain precise temperatures — for example, the exact 180 degrees you’d need for a satiny crème anglaise without risk of curdling. Some cooktops will even let you move pans around different heat zones, mimicking a French top.

“The more people learn about the environmental costs of gas, the more they’re turning to induction,” Ms. Boucher said. “It’s the future, there’s no going back.”

Induction’s functionality and sustainability have won over a growing number of professional chefs, both at their restaurants and at home.

When Eric Ripert, the chef of Le Bernardin, renovated the kitchens of his Manhattan apartment and Hamptons beach house, he nixed the gas, instead choosing sleekly powerful induction cooktops by Miele and Gaggenau.

“After two days, I was in love,” Mr. Ripert said. “It’s so much more precise than watching a flame. You can really focus on your cooking and pay attention to what’s inside the pan, not what’s underneath it.”

He hasn’t yet converted his restaurant kitchens.

“It would be a big expense to replace stoves that still work well, but, if the gas stove broke, I’d consider it,” he said, adding that he thought his cooks would adapt quickly. “After a few days, they’d all love it.”

That is just what happened with the chef Justin Lee of Fat Choy in Manhattan, although he wasn’t expecting it.

When he opened the Chinatown restaurant in September 2020, there was no gas hookup.

“Most restaurants wouldn’t open without gas, but we couldn’t wait,” he said, “so we had to find our way with electric.”

It was a lot easier than he had anticipated, and he’s come to prefer induction for its consistency at high and low temperatures.

On the gentlest setting, he confits garlic and other ingredients for his XO sauce without having to watch it. “You can walk away, and it won’t ever burn,” he said.

And when the restaurant gets busy, he can crank the temperature way up.

“For us, it’s a workhorse,” he said. “It can boil water in minutes, which, for cooking noodles, is significantly faster than gas.”

Mr. Lee discovered other advantages over the summer: His kitchen did not get as ferociously hot as it would have with a gas stove, and the absence of open flames also led to a decrease in burns.

Before writing this article, I spent time testing induction in my house, various friends’ kitchens and several showroom kitchens.

At home, I pulled the knobs off my gas stove and hid them in a drawer to discourage cheating. Then, I covered the hobs with metal sheet pans, arranged two portable induction burners on top of the pans, and vowed to give up the gas for at least two weeks.

The first order of business was figuring out which pieces of cookware were compatible with induction, then rearranging them so the viable ones were in easy reach. Only magnetic pans like cast-iron and stainless steel will work, which sidelined my beloved copper pans.

Then I got to cooking. I boiled huge pots of pasta water in minutes on the highest setting, and marveled at the speed. Then I slowly sautéed skillets of slivered garlic on low heat, never scorching them, no matter how long I got lost in my phone. With one burner on high and the other on low, I could make my favorite midnight pasta faster and more easily than on my gas stove.

Using a cast-iron pan and the highest setting, I achieved gorgeously rare lamb chops that were more evenly bronzed and crisp-edged than usual. Wiping up their splatter was the work of 20 seconds with a vinegar-soaked cloth, rather than the quarter-hour it would take to pull off the greasy hobs and scrub them in the sink.

In the mornings, my low-heat scrambled eggs were soft, custardy and never overcooked. And once I learned to set my oatmeal pots to simmer at exactly 209 degrees, they never came close to overboiling.

One thing that I did notice was the difference in the two burners. Although both worked similarly (and extremely well) at the highest and lowest settings, there was a huge difference in the middle. The high-end burner — an expensive Breville Control Freak I borrowed for testing — could be set to an exact temperature, like the 209 degrees I need for simmering my oatmeal. With the less-expensive burner (a Duxtop, Wirecutter’s top pick), I could only set temperature intervals of 20 degrees. At 200 degrees, my oatmeal didn’t even bubble. At 220 degrees, it boiled over. Luckily, cleaning it up was a cinch.

In my testing of both burners and ranges, I found that the thing I valued most was precision — that is, having as many temperature options as possible. I also greatly preferred chunky knobs to a touch screen: They were more intuitive, and easier to maneuver when my hands were dirty or wet.

As for the knobs from my gas stove, it’s been four weeks, and I still haven’t reattached them. I think they’re in that drawer, but, honestly, I haven’t checked. I haven’t missed the gas at all.