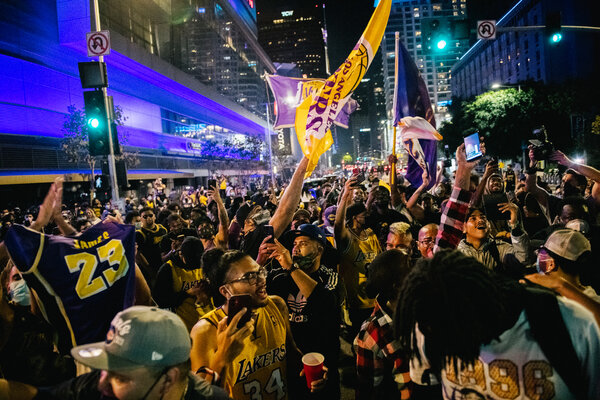 On Sunday evening near my apartment, cheers erupted from the sports bar showing the game on its patio. Fireworks exploded across the city, and in Downtown Los Angeles, crowds got rowdy.

The Los Angeles Lakers had done something the team has done 16 times before: won the N.B.A. championship.

Of course, it’s October. The memory of one of the last times fans spontaneously gathered outside Staples Center — to mourn the shocking death of Kobe Bryant — loomed large.

And the Lakers’ victory over the Miami Heat capped a surreal, momentous season defined by the pandemic and by protest against racism and police brutality.

[See a timeline of the year that changed basketball.]

My colleague Marc Stein wrote more about what it all means for basketball, the Lakers and LeBron James:

Amassing the best regular-season record in the Western Conference could not help the Los Angeles Lakers in the N.B.A. bubble. With games played at a neutral site at Walt Disney World — and without fans — holding the West’s No. 1 seed in the playoffs was mostly ceremonial.

The Lakers lived up to billing anyway, turning to the devastating duo of LeBron James and Anthony Davis to override the loss of home-court advantage.

James capped the longest and most turbulent season in N.B.A. history — one of great sorrow for his Lakers in the wake of Kobe Bryant’s tragic death in January — by averaging a near triple-double in the N.B.A. finals against the Miami Heat and restoring the Lakers to championship status.

In just his second season in Los Angeles, James has his own enduring slice of purple-and-gold history now. He arrived in July 2018 after the worst five seasons in club history and, at the first attempt since forming a classic superstar tag team with Davis in July 2019, enabled the Lakers to match the Boston Celtics, their longtime rivals, for the league lead in championships with 17.

This is the Lakers’ first title with Jeanie Buss, the daughter of the team’s longtime owner Jerry Buss, in charge. Rob Pelinka, the Lakers’ general manager, served as the longtime agent for his close friend Bryant, who was killed in a helicopter crash, alongside his 13-year-old daughter Gianna and seven others, on Jan. 26.

Buss and Pelinka were widely criticized before completing a trade with New Orleans to acquire Davis, in part because the trade took months to materialize and because the coach they hired, Frank Vogel, was their third choice.

Yet it was difficult, even amid all those personal breakthroughs and redemption stories like the veteran center Dwight Howard, not to focus on James and what a fourth championship does for his legacy.

James did not win the N.B.A.’s regular-season Most Valuable Player Award and may never do enough, for some, to nudge Michael Jordan off his perch in the sport’s eternally heated greatest-of-all-time debate.

But winning a finals M.V.P. trophy in a third different uniform puts James in his own stratosphere. When he turns 36 in December, James will do so with the satisfaction of lording over the N.B.A. once again. And with the acceptance of the Lakers’ ever-demanding fans, too.

Although Gov. Gavin Newsom said on Monday that some sort of safe victory parade could be theoretically possible, no plans have been announced. [The Los Angeles Times]

“One of the worst, strangest years.” Five people tell what they learned about basketball, and themselves, in a turbulent season that changed the N.B.A. [The New York Times]

Even after the N.B.A.’s Hollywood ending, there are lots of questions. [The New York Times]

If you missed it, here’s a column exploring LeBron James’s burden of being the greatest. [The New York Times]

(This article is part of the California Today newsletter. Sign up to get it by email.)

In Texas, counties have been fighting state officials in court to set up multiple drop-off locations for absentee ballots, arguing that having just one drop box in each of the state’s sprawling counties presents an unfair hurdle to voting.

In California, the state’s Republican Party contributed to the opposite problem, state officials said on Monday: It placed more than 50 deceptively labeled “official” drop boxes for mail-in ballots around the state, mostly in conservative areas.

The Orange County Register first reported on the metal drop boxes over the weekend. They were labeled in ways that encouraged voters to leave their ballots, even though the boxes didn’t adhere to the strict security guidelines in place for state-sanctioned locations.

And it wasn’t immediately apparent that they were distributed by the California Republican Party, whose leaders on Monday admitted responsibility for the boxes.

State officials, including California’s secretary of state, Alex Padilla, and attorney general, Xavier Becerra, ordered the party to stop, saying the action was illegal. Some county officials also condemned the use of the boxes.

The Republican leaders, however, have doubled down.

An update on the pandemic

Even as coronavirus case numbers continue to surge in other parts of the country, California has continued its promising trajectory.

The state’s positivity rate over the last two weeks is 2.6 percent, even as average daily test numbers have soared to almost 122,000. The number of people hospitalized with Covid-19 is at its lowest point in six months, according to The Los Angeles Times.

Gov. Gavin Newsom said on Monday that he was set to send a team to Disney World as part of a slow, halting effort to reopen theme parks in California.

But soon, as Mr. Newsom noted, it’ll be Halloween. Which means that soon after that, it’ll be Thanksgiving and the winter holidays.

“This is serious,” he said. “People are more likely to start congregating and mixing.”

The state is still working to expand contact tracing and isolation support for people who have Covid-19, officials said.

The governor also said to expect updates on restrictions and guidelines in coming days.

Low-income college students are having trouble finding places to study and, in many cases, live. And many are dropping out. [The New York Times]

At the Central California Women’s Facility, the world’s largest women’s prison, inmates who hadn’t tested positive for the coronavirus were quarantined with those who had. Conditions were dire. [The 19th]

Counties have been allowed to move through the state’s new tiered reopening process. Here’s where things stand. [The New York Times]

On Monday, Paul R. Milgrom and Robert B. Wilson, two economists affiliated with Stanford University, were awarded the Nobel Prize for their improvements to auction theory.

You can read more about that important work here.

What I’m here to tell you about today is much less complex. It’s a Nest camera video that Stanford tweeted out, showing Mr. Milgrom and his wife arriving at Mr. Wilson’s house (the two are both colleagues and neighbors) in the wee hours of the morning to deliver the news in person.

Mr. Wilson, the university said, had unplugged his home phone, thinking he was getting spammed.

California Today is edited by Julie Bloom, who grew up in Los Angeles and graduated from U.C. Berkeley.