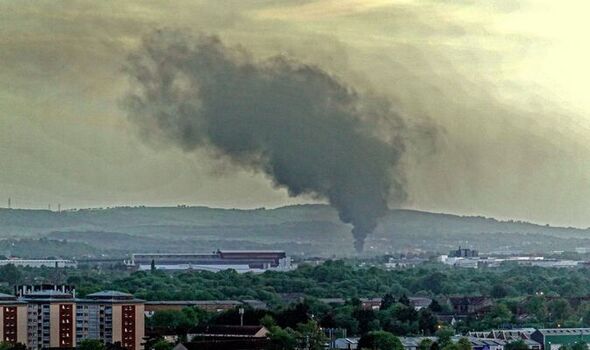 Scottish Fire and Rescue Service was called to reports of an open fire in Greenock Road, Paisley, at 8.13pm on Saturday. The blaze was just over a mile away from Glasgow Airport.

Witnesses on social media reported a huge blaze to the west of Glasgow.

Fellow Twitter user @liberallyapply said the fire was “belching out black smoke into the sky at quite a rate”.

To which @rainarmstrong replied: “It looked quite wild from the motorway.”

Scottish Fire and Rescue Service said the smoke was caused by a pile of tyres which had caught fire.

A spokeswoman said: “One appliance attended with four crew members. The fire was out by 9.08pm.

“There were no injuries.”