Bobi Wine, whose real name is Robert Kyagulanyi, has a large house about an hour outside Uganda’s capital, Kampala.

After sending out a couple of panicky-sounding tweets on Friday saying members of the military were encroaching on his property, that his property had been essentially surrounded by the military, we drove out there as quickly as we could.

We found him at the edge of the lawn, where there is then a gate and a fence and a hill which leads down to more of his property, which is forested. 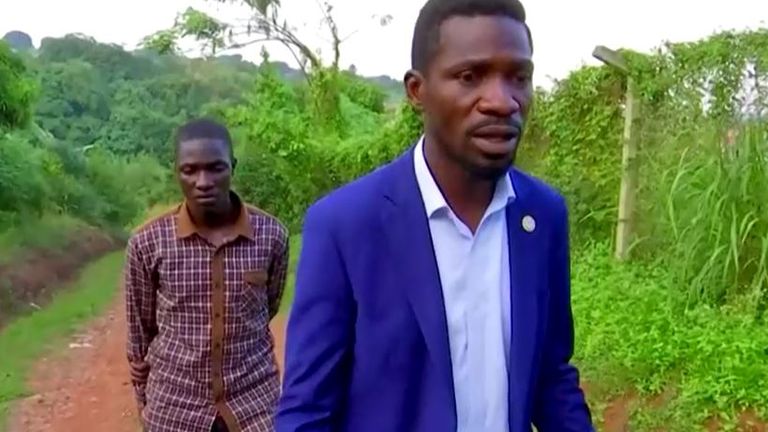 He was somewhat anxiously examining his land.

Mr Wine told us that he had seen troops – soldiers on the property – that they had come and beat one of his guards up.

We were introduced to the guard who had suffered some facial injuries. And then he took us and a small number of other journalists on a tour of his property.

We went down a hill into some of the trees, around the corner and we saw a group of about five uniformed men armed with automatic weapons. 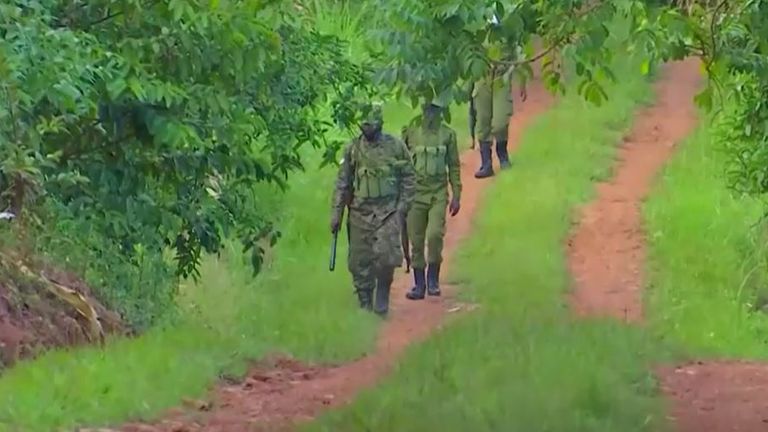 One of them picked up his weapon and pointed it at us. And we, along with Bobi Wine, ran for cover.

I must say, at no stage was one of the weapons discharged, but it was a frightening experience.

We ran back up to the main house, had a chat with Bobi Wine, who said this was an example of the intimidation that he has faced during the campaign and increasing intimidation now that the election results are expected.

Polls have closed in Uganda with president Yoweri Museveni, who is 76, seeking a sixth term in office.

But he is facing a strong challenge from Mr Wine, a former reggae singer who is half his age. Results are expected to be delivered by the Election Commission on Saturday.

But Mr Wine says the government is trying to put him in his place.

It is certainly an unusual, a highly unusual way to treat a presidential candidate in this election or in any election.

He has run a very strong campaign. He has fired up certainly younger members of the electorate in this country.

A military spokeswoman said any soldiers in the area were there to protect him.

And a Kampala police spokesman told NTV Uganda that three unidentified people had tried to enter Mr Wine’s property and one had been arrested.

But this does sound and look like government intimidation to me. On another side of the property, through a chain link fence, we could see soldiers and plainclothes men with weapons as well.

I tried to speak to them. They said nothing.

Bobi Wine is the country’s best known and most effective opposition leader – but this is a very uncomfortable place for him to be at the moment.