Successive UK heatwaves have beaten down on the general public this year, with intense sunlight raising temperatures above 30C. Parts of the country have already noted highs of 34C maximum, brushing all-time national records. And meteorologists have now identified three distinct periods of heat, and another lies on the horizon.

Although the country has seen record temperatures in recent weeks, the last few days have seen more unsettled conditions, with periodic heavy rain and wind.

Temperatures have recovered very little since the last heatwave in June, continually hovering around the mid-teens and low 20C mark.

They will remain so until the latter half of July – but that’s when forecasters expect another heatwave will take shape.

Netweather has reported temperatures rising up to 26C for much of the country between July 12 and 20 with most regions bathing in sun by Thursday, July 16. 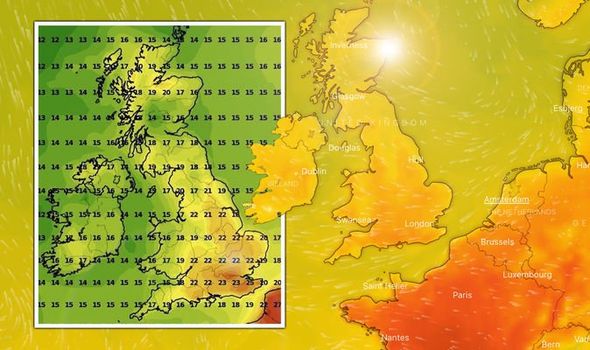 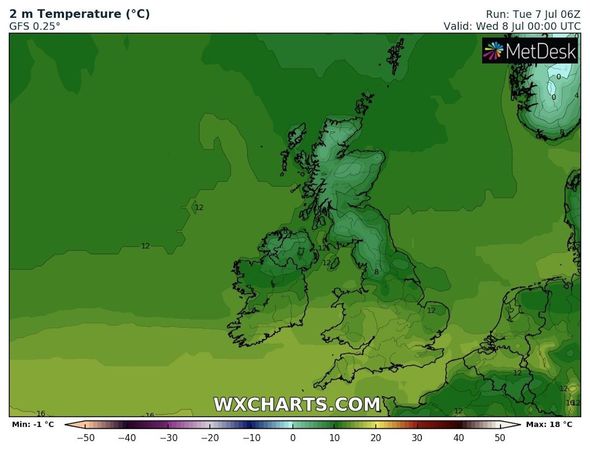 In London, maps from WXCHARTS show temperatures will hit a balmy 23C on Monday, July 13, stretching to 24C over into the weekend.

The service expects people will see highs of 27C by Monday, July 20, but indicated a disparity between the north and south of the UK.

Southern areas may even see the mercury build back towards 30C (86F) as the jet stream moves down.

And with a seven-day heatwave ready to sizzle Britain, bookies Ladbrokes have cut odds from 7/4 to just 10/11 on this being the hottest July ever. 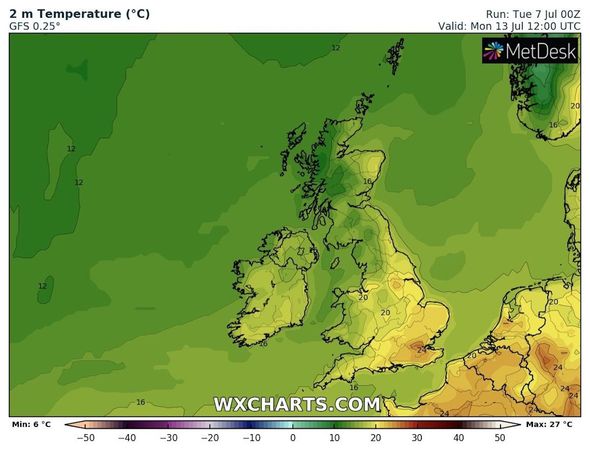 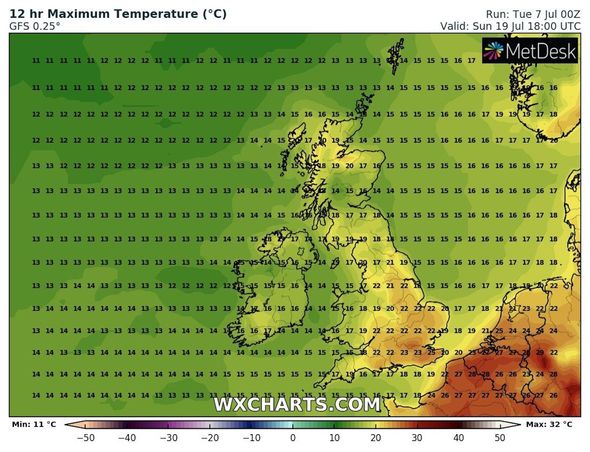 Alex Apati of Ladbrokes said: “It’s now odds-on that this goes down as the hottest July ever with scorching temperatures on their way.”

Meteorologists with the Met Office came to the same conclusion, noting a “north-south split” in their long-range forecast.

The forecast, which covers July 11 to July 20, states the period will begin with showers and sunny spells, but as the period progresses they will most likely stick in the north.

The Met Office said: “Isolated light showers in the north to start, but elsewhere looking dry with bright or sunny spells. 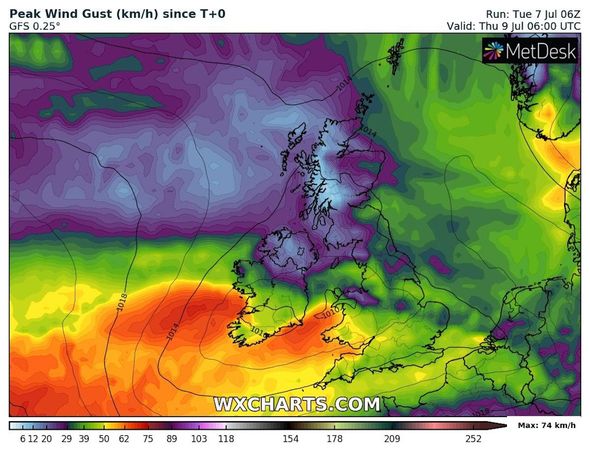 “Winds staying light and temperatures rather cool to average.

“Looking further ahead, a north/ south split across the UK seems most likely.

“Northern and northwestern areas are expected to see further spells of rain, accompanied by strong winds, with the possibility of these spreading to some other areas at times.”

“Further south, however, there should be more in the way of dry weather, though even here, there is still the possibility of some showers or longer spells of rain.

“Temperatures are likely to be either around or on the warmer side of average, with the warmest conditions likely in the southeast.”

Until then, temperatures will remain unsettled, continuing a trend which has stuck for the last two weeks.

Many people across the UK will have seen periods of intense sun edged by equally intense wind or rain, and there may be more to come.

Tropical storm Edouard is currently swirling in the Atlantic, heading towards the UK.

While it is unlikely to hit, experts believe it will bring more wind and rain before the sun returns.

Fragments of the storm will arrive by Thursday, following two straight days of showers for parts of the country.

BBC meteorologist Chris Fawkes said the rain would come “in pulses – light one minute and then a bit heavier”.