The US Supreme Court has heard arguments on whether President Donald Trump should be allowed to keep his financial records secret, in a major showdown over presidential powers.

Mr Trump has refused to share documents that could shed light on his fortune and the work of his family company.

Two congressional committees and New York prosecutors demand the release of his tax returns and other information.

A ruling is expected within weeks. Unlike other recent presidents, Mr Trump has refused to release his tax returns and a decision against him could result in his personal financial information becoming public in the campaign season.

Experts say the ruling will have far-reaching implications for the ability of Congress to scrutinise the activities of sitting presidents and of prosecutors to investigate them.

The judges heard the cases remotely because of the coronavirus pandemic. The Supreme Court has a 5-4 conservative majority and includes two Trump appointees – Neil Gorsuch and Brett Kavanaugh.

What are the cases about?

In the three cases, Mr Trump’s lawyers tried to block the subpoenas – orders to hand over evidence. Lower courts in Washington and New York ruled against the president in all cases, but those decisions have been put on hold pending a final court ruling.

Two committees at the Democratic-controlled House of Representatives demanded financial records from two banks that did deals with Mr Trump – Deutsche Bank and Capital One – as well as from Mazars, the president’s accountants.

Deutsche Bank was one of the few banks willing to lend to Mr Trump after a series of corporate bankruptcies in the 1990s, and the documents sought to include records related to the president, the Trump Organization and his family.

Mr Trump’s lawyers argued that Congress had no authority to issue the subpoenas, and no valid justification to seek the records. 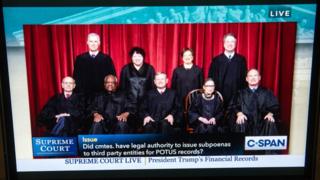 Mazars is also the recipient of a subpoena from Manhattan District Attorney Cyrus Vance Jr, a Democrat.

Mr Trump’s lawyers said his records could not be handed over because his position gave him immunity from any criminal proceeding while in office.

The banks and the accounting firm said they would release the information if ordered.

The question for the Supreme Court justices was whether Mr Trump’s accountants and bankers will hand over financial records from his past. But the bigger issue, the one that loomed over the justices’ teleconference, concerned the balance of power between Congress and the presidency.

The discussion on the call was amiable enough, with one of the lawyers referring to the others as his “friends”.

But below the banter, the debate was fierce: conservative justices asked questions that showed their concerns about the harassment of the president and the erosion of the power of the executive branch. In turn, liberal justices asked questions that showed their worries about Mr Trump’s time in office and about the presidency itself.

The liberal justices clearly want to rein him in and restrict the power of the office. Ultimately, the Supreme Court teleconference sounded much like debates taking place across the US, a deeply divided nation in which people are fighting over fundamental beliefs and principles – with Mr Trump, as always, at the red-hot centre.

The congressional cases were heard together, and the justices seemed divided based on their inclinations. The liberals appeared more sympathetic toward the House position although they raised questions about the potential lack of limits on Congress’ power to subpoena the president’s personal records.

The justices asked Douglas Letter, a lawyer for the House, to explain why the subpoenas were not simply harassment of the president, and whether Congress should be limited in issuing them. Mr Letter pointed out that the measures, in these cases, were directed at third parties and had been upheld by lower courts.

But Jeffrey Wall, a Justice Department lawyer who argued in favour of Mr Trump, said the subpoenas had a “profound potential” to “harass and undermine the president”.

“It’s not much to ask that before the House delves into the president’s personal life it explains in some meaningful way what laws it is considering and why it needs the president’s documents in particular. The subpoenas here don’t even come close.”

Conservative Chief Justice John Roberts was sceptical that Congress had no authority to issue a subpoena, as suggested by the Trump defence team, but also raised questions that congressional power was limitless.

Justice Roberts also seemed to disagree with Mr Letter, who argued that lawmakers had broad authority to seek information about a president for the purpose of writing laws. “Your test is not much of a test. It’s not a limitation,” the chief justice said.

Liberal Justice Elena Kagan told Jay Sekulow, a lawyer for Mr Trump, that a “fundamental precept of our constitutional order is that the president is not above the law”.

But Mr Gorsuch expressed concern that members of Congress were abusing the process to hunt for illegal activity, saying: “Normally we use law enforcement tools like subpoenas to investigate known crimes and not to pursue individuals to find crimes.”

Later, in the case involving the Manhattan district attorney’s subpoena, the justices indicated doubt over Mr Sekulow’s argument that a president cannot be investigated while in office.

What is the background?

The cases being heard resemble earlier disputes over the powers of a sitting president.

In 1974, the court unanimously decided that President Richard Nixon must comply with a court’s subpoena for tape recordings in the Watergate scandal. And in another unanimous decision, in 1997, it allowed a sexual harassment lawsuit to go forward against President Bill Clinton.

Justices appointed by Mr Nixon and Mr Clinton voted against them in the cases.