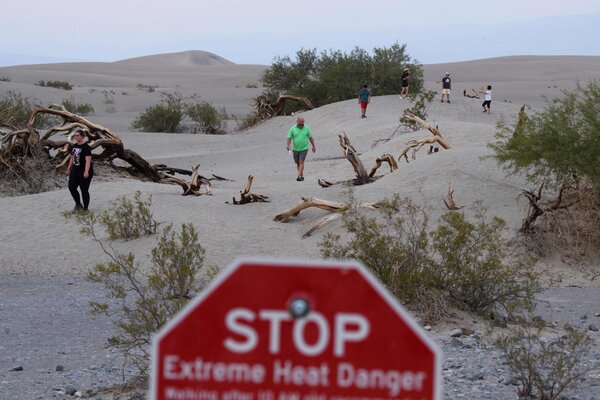 Summer officially started on Sunday, but Californians had already been asked to save energy during a record-threatening heat wave across the West.

The mechanism for making this request is known as a flex alert, when the state’s electrical system operators effectively beg residents to avoid using major appliances, set their thermostat to 78 degrees or higher and turn off unnecessary lights, all to avoid triggering blackouts.

As the flex alert Twitter account tweeted on Friday after an apparently successful deployment: “Your conservation efforts helped keep the #powergrid stable.”

Much of the Western United States is contending with increasingly hot summers, which cause energy use to surge. California’s energy grid is likely to be pushed to the brink — or worse — more frequently in the coming years.

To better understand what that means and how we got here, I spoke with Ed Hirs, an energy fellow at the University of Houston. Here’s our conversation, lightly edited and condensed.

I take it that you’ve been keeping an eye on the flex alerts — let’s start with those. At a very basic level, why do those happen?

Really good question. We have to go all the way back to the beginning.

In the late 1930s, when the federal power administration came into being, folks started looking at grid reliability and that became the goal — especially since that was all done under President Franklin Delano Roosevelt as we were pointed toward World War II. The social contract with the utilities was: You provide electricity reliably, and we’ll make sure you don’t go broke.

And then things changed?

Things began to go sideways when California passed Assembly Bill 1890 in 1993. Everything was implemented in 1996. We later had a similar thing happen in Texas, but nobody in Texas learned anything from California.

So what people had seen was the massive overbuild of energy generation facilities. They had been built for peak time, and the equipment would be idle for the rest of the year. In California, for about eight out of 12 months, it was idle because the weather was so nice. That’s why people live in California.

Every governor and every legislator wants to save voters money. What happened over time was that the market mechanisms that folks put in with A.B. 1890 did decrease the wholesale price of electricity.

But because there was an oversupply of generators most of the year, they tended to bid down the price, so utilities weren’t spending money to add generators or maintain the existing ones. So you began to have equipment failures. Plus, California has the initiative to close its nuclear and coal plants.

These old baseload plants began to close, and energy providers tried to replace them with new, renewable green plants and to supplement that with power from Oregon, Washington, Wyoming and Arizona. Today, California on a daily basis imports about 35 percent of its electricity.

That’s a big problem, because now it’s not just California’s grid reliability you have to worry about, it’s your neighbors. That’s what happened last August: The heat wave got everybody.

And thus, we have flex alerts?

Exactly. Then, there’s the other component of this.

We’ve been talking about the generation segment of the market, and the other side is in the delivery. We’ll use Pacific Gas and Electric, which has a long corporate culture of not reinvesting and of not maintaining its equipment.

You’ve written, basically, that California is getting what it pays for with its electricity, which is not a lot.

At the same time, we’re constantly reading about how utilities like PG&E have opted to pay their executives big bucks while failing to maintain equipment, with deadly results. Can you help square those things?

PG&E is a regulated utility, meaning that they should be stepping up in front of the California Public Utilities Commission and saying, “We need to raise rates to maintain the wires, to maintain the natural gas pipes.” Remember the San Bruno explosion?

But if they’re arguing they’re not making enough money to maintain the equipment, the public utilities commission is responding, “We’re mad at you, so we’re not going to let you raise rates.” All the utilities are then saying, “What can we do? Well, I’ll pay myself a bonus.”

There are people at PG&E who know what to do. They’re not being allowed to maintain the pipes and the lines by corporate management, which goes back to that corporate culture.

This seems to be kind of a bad spiral and perhaps the result of a flawed investor-owned utility model.

Absolutely right. It’s not just California: Northeast Utilities cut costs and cut costs, until on any given day, depending on which way the wind blew, power in New York or Boston could’ve died.

Is there a way to fix this in California?

There is. It’s going to cost the consumers or taxpayers money to make the grid safe and reliable.

What worries you most, from an electricity market standpoint, about the extreme heat that is our new normal? Are we just kind of out of luck this year?

This year and next year, in Texas and California, we’re screwed. Especially with the hydroelectric plants at less than full power because of the drought.

The point I always make is the value of electricity is not in the cost of what it takes to produce it. It’s what it allows you to do. Hospitals, life support. It’s a national security issue. Imagine it: Texas was four minutes from losing the grid for months.

So for California, what does that look like? Lots of flex alerts? Rolling blackouts?

I think that’s where California has to be. The grid in California is more resilient than in Texas for the time being, and it does have the ability to import power — if the other states don’t need it first.

Here’s what else to know today

More than 500 firefighters are battling the Willow Fire, which is burning south of Big Sur in Los Padres National Forest, The Associated Press reports.

Insurance companies are abandoning tens of thousands of rural Californians because of wildfire risk, forcing them to find replacement coverage at double or triple the rate, The Sacramento Bee reports.

The San Francisco Chronicle looks at the rapid spread of the Delta variant in the state.

Confidential court records obtained by The New York Times reveal that Britney Spears quietly pushed for years to end her conservatorship, and her father’s role in leading it.

The Warriors’ Stephen Curry won’t play for Team USA at the Tokyo Olympics this summer, The San Francisco Chronicle reports.

A man who worked for a trucking contractor was charged with stealing 21 tons of nuts from a pistachio grower.

The Times’s architecture critic asks: Can Los Angeles design its way out of its housing crisis?

Diego Rivera’s rarely seen “Pan American Unity,” which celebrates the Americas, has been carefully extracted from its home at City College and moved to SFMOMA.

“That’s the most R-rated G you will ever see in your life.” A look back at Disney’s “The Hunchback of Notre Dame,” which was released 25 years ago this month.