As Game of Thrones returns for its final series, Dame Diana Rigg – aka Olenna Tyrell – looks back on her time with the hit HBO show.

She may have had many of the best lines on Game of Thrones, but Dame Diana Rigg says she has not watched the series “before or since” she appeared in it.

Accepting a special award at this year’s Canneseries TV festival in France, the British actress said she “hadn’t got a clue” about what was happening on the show.

Olenna left at the end of the last series by drinking poison – a death scene she said was “just wonderful”. 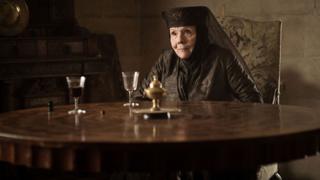 “She does it with dignity and wit, and wit is not often in final death scenes,” says the actress, who will celebrate her 81st birthday in July.

The young Rigg became famous in the 1960s for playing Emma Peel in TV series The Avengers. Being offered Tyrell in 2013, she says, echoed the circumstances of her first starring role.

“They just called my agent,” she explains. “The world turns full circle, because just like with The Avengers, I wasn’t watching Game of Thrones and had absolutely no idea of its influence in the world.

“Interestingly enough, they tested me very early on,” the actress recalls. “One of my earliest scenes was incredibly difficult, listing all the things my marching army would need.

“It went on forever, talking about the sheep and the cows and the soldiers. I read that and thought, ‘these guys are testing an old actress to see if she can get it into her head.’

Rigg is also known for playing Tracy, the only woman who became Mrs James Bond, in 1969 film On Her Majesty’s Secret Service.

Given the choice, though, she’d choose Olenna every time. “I love playing bad [characters],” she says. “They are so much more interesting than good.

“There are some actors who don’t like to play bad; they like to be liked. I love to be disliked. Olenna had the best lines, they were very kind with their scripts.”

The issue of pay equality in the film industry has been highlighted of late, not least by the revelation that Michelle Williams was paid a fraction of what Mark Wahlberg earned for reshooting scenes in All the Money in the World.

Rigg is highly supportive of Williams and her backing for the US Paycheck Fairness Act, having discovered while working on The Avengers that she was being paid less than one of its cameramen.

“I remember thinking, ‘something’s very wrong here,'” she explains. “When I complained publicly, the newspapers got hold of it, and I was represented as a mercenary young woman stepping out of line and demanding money.

“I was lonely as well because no one supported me. I did get more money, but thereafter I was labelled as go-getting and ‘hard’ – and it was unfair because I wasn’t.

“The fight goes on,” she continues. “I wonder if anyone’s done a survey as to whether people go to watch a male or a female lead.

“I go to see a female lead as often as a male one, so why there’s disparity in the pay cheque I have no idea. Bosses need to be talked to about this.”

Dame Diana was honoured in Cannes for a lifetime working in television that saw her recently appear as the Duchess of Buccleuch in ITV’s Victoria.

For all her many credits, though, she does not tend to watch herself on screen. “Been there, done that, all of it,” she says.

“Dredging up the past is not my style. I prefer to move on.”

Canneseries runs until 10 April in the south of France. Game of Thrones returns to US television on 14 April and starts on 15 April in the UK on Sky Atlantic.