“In the Long Run,” which just wrapped up its third season on Starz, is a comedy based on the actor Idris Elba’s childhood in the Holly Street Estate, a racially diverse public housing community in the Hackney borough of London. Set in the fictionalized Eastbridge Estate in the early ’80s, Elba, who created the series for Britain’s Sky One, plays Walter Easmon, who, like Elba’s actual father, Winston, immigrated to England from Sierra Leone and worked in a nearby American-owned car parts factory.

But this story of migration and integration isn’t told exclusively from the perspectives of Walter or his 13-year-old British-born son, Kobna (Sammy Kamara), who is based on Elba. Instead, the show is a broad, upbeat portrayal of a community, a story about interracial working-class Britons and West African immigrant families living together in London right after the infamous Brixton race riots in 1981, during the heyday of Prime Minister Margaret Thatcher’s conservatism.

Adding to this lively mix of characters is Agnes (Madeline Appiah), Walter’s Ghanaian stay-at-home wife turned community organizer and corporate secretary; his brother Valentine (Jimmy Akingbola), a former professional soccer player who arrives in England only to refuse a steady gig in the factory and become a local D.J.; Walter’s white best friend and neighbor, the curmudgeonly yet cuddly Bagpipes (Bill Bailey); and Bagpipes’ peppy and entrepreneurial wife, Kirsty (Kellie Shirley). All three seasons are streaming on Starz, which picked up the show in 2019. 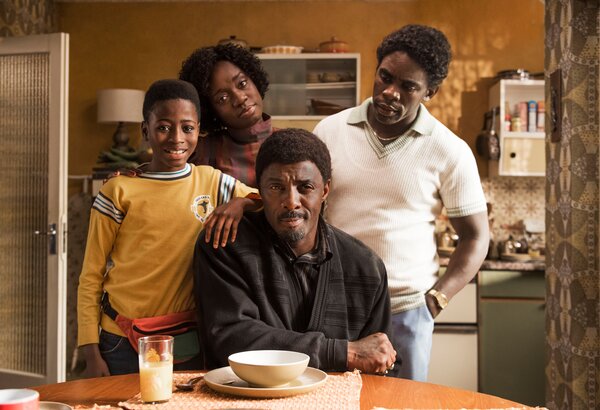 Elba is known mainly for more serious roles, both in TV shows like “The Wire” and “Luther” and in movies like “Beasts of No Nation,” “Thor” and “Mandela: Long Walk to Freedom” (or for being named as the Sexiest Man Alive by People magazine in 2018.) But the gently comedic “In the Long Run” better reflects who he is as a person. It’s an intimate portrait of his childhood, made possible by his illustrious career.

It is also part of a string of recent works, produced by his company Green Door Pictures, that highlight his love of Black music. Like his real-life uncle and the character Valentine, Elba is also a D.J., who as D.J. Big Driis spun records at the wedding reception of Prince Harry and Meghan Markle, in 2018, and at Coachella in 2019.

Elba’s directorial debut, the 2019 crime drama “Yardie,” follows its main character, a Jamaican drug courier named D (Aml Ameen), as he moves to London to avenge the murder of his brother, a DJ who died trying to unite warring gangs with his music. That same year, Elba starred in “Turn Up Charlie,” a comedy series he created with Gary Reich about a down-on-his-luck British D.J. who ends up taking care of his best friend’s 11-year-old white daughter, Gabrielle (Frankie Hervey).

Neither received much critical love, and Netflix canceled “Turn Up Charlie” after one season. (“He’s just not funny,” Mike Hale, a New York Times TV critic, wrote of Elba in his review.)

“In the Long Run,” however, debuted to plenty of praise in Britain in 2018. Elba is really funny in it and routinely cedes the spotlight to his dynamic co-stars, and the show shifts focus smoothly between sobering topics — racial profiling, gentrification, AIDS activism — and sillier ones, like Jheri curls, schoolboy crushes and missed D.J. sets.

Currently in Australia filming George Miller’s “Three Thousand Years of Longing” with Tilda Swinton, Elba spoke in a video call last week about the cultural vibrancy of the African and Caribbean communities of 1980s London and why he, as a generally private person, wanted to see his parents’ love story on TV. These are edited excerpts from the conversation.

How did “In the Long Run” come about?

Just working backward, this show came to life as an idea about four years ago. I had this yearning to do some comedy, and since I’m considered a dramatic actor, the roles weren’t coming in. Kevin Hart was stealing all of them! So I just thought, I’ve got to do something to put myself in this marketplace. My kids think I’m funny; my family thinks I’m funny; let’s go for it. And because my dad was one of the funniest storytellers I had come across, I wanted to find a way to tell his story and honor my parents. It was just the three of us, my mom, my dad and me, and they came from West Africa to the U.K. with a whole bunch of lively stories and experiences. I wanted to harness our lives together into something relatable and turn their hardships and integration into the U.K. into stories that were lighthearted.

Many Americans first saw your comedic side when you played Michael Scott’s boss on “The Office.” Why did you choose comedy here to tell this very personal story? Do you really believe people don’t think you’re funny?

I had to write my own show to get some comedy! “The Office” was amazing, but essentially, my character wasn’t comedic. He was kind of like the tough guy. I find that a lot of the writing about Black culture tends to be about hardships, crime, or tends to have scenarios that feel worthy of a dramatic lens. And when people think about Africa, they tend to think in doom and gloom or stereotypes, which I am not keen to keep fueling. We don’t make light of the racism and adversities at the time on our show, but sometimes with comedy you can cover a bit more ground in a lighter way.

“In the Long Run” just finished its third season. How did your series anticipate some of the issues that “The Crown” and “Small Axe,” which are also set in 1980s Britain, explore? What unique perspective are you hoping to show about that time period?

When you think about the ’80s, you think about Margaret Thatcher but also neon lights and Jheri curls. It was definitely a time of incredible evolution and expansion. And it was also a real political narrowing in Britain that was undeniably Thatcher led. The show is about the life that spawned, fizzled and nurtured people my age underneath all of that.

But our lens is very specific to African, Caribbean and Asian cultures that were the majority in these council clusters, homes that were designed for low-income residents. Those homes were an incubator of life, and there’s a mountain of culture, politics, thinkers, books and people that were born in that era and in those communities that are coming to middle life now. As a kid born in the early ’70s who was a teenager in the ’80s, I look back at that era with fondness. “In the Long Run” is a love letter to that time period.

With “I May Destroy You” and “Bridgerton” doing so well, there seems to be new excitement for shows about Black British life here in the United States. Do you think it is a trend or a transformation?

Over the last 10 years in the U.K., there have been real strides to put a lens on Black culture in a dramatic way. We’ve seen lots of young writers and producers coming out and telling their stories, and then you’ve got people like Steve McQueen who’s telling these big stories, me telling another story in “Yardie.” I think that in general, everyone’s lenses are starting to widen out. I’m so excited that there is an appetite for U.K. Black cultures in a way that penetrates the world. I also want to see the same for French, German or Belgian shows because these are also places where Black people migrated from Africa or the Caribbean. We’re everywhere.

Music is a big part of the show, and in each episode a teenage boy suddenly breaks into an R&B song right in the middle of a scene. Where did that idea come from?

You’re talking about the singing boy? He is a texture that I distinctly remember from growing up in the Holly Street Estate — these sprawling projects in Hackney that on one side had the tower blocks where we lived, and on the other side were the lower flats that were notorious for crime and gangsters. My mom used to hate me going down there, but every time I went there to see my friends, there was always someone singing. I never knew who he was, but it was a kid who had a wicked voice, or just could rap. And he would just sing out of his window and was like a peace siren. When he was singing, there were no issues in the hood. So in the show, I wanted it to be a small character and part of the fabric of how I remember what was going on back then. Just a lovely memory.

And yet the show has a modern sensibility, too — you confront gender roles, homophobia and your character’s struggle to be emotionally vulnerable with his son. How much do current conversations about Black masculinity shape your storytelling?

Valentine looking at his own homophobia was definitely a product of our modern storytelling. It is a topic that is relatable now and really shows how far we’ve come in areas. But I also love my dad and I miss him now he’s gone — if I’m honest there are postcards all over “In the Long Run” of things I wish I said, or how I imagine it could have gone. And when I think back, my dad and my mom were best friends, even though they also could be at odds. Their tenderness is always depicted in my show because I think it is important to see Black people in love and kind, and not sexualized or a stereotype of a Black man not being affectionate. I want to show something that offers an alternative perspective to what most people think.