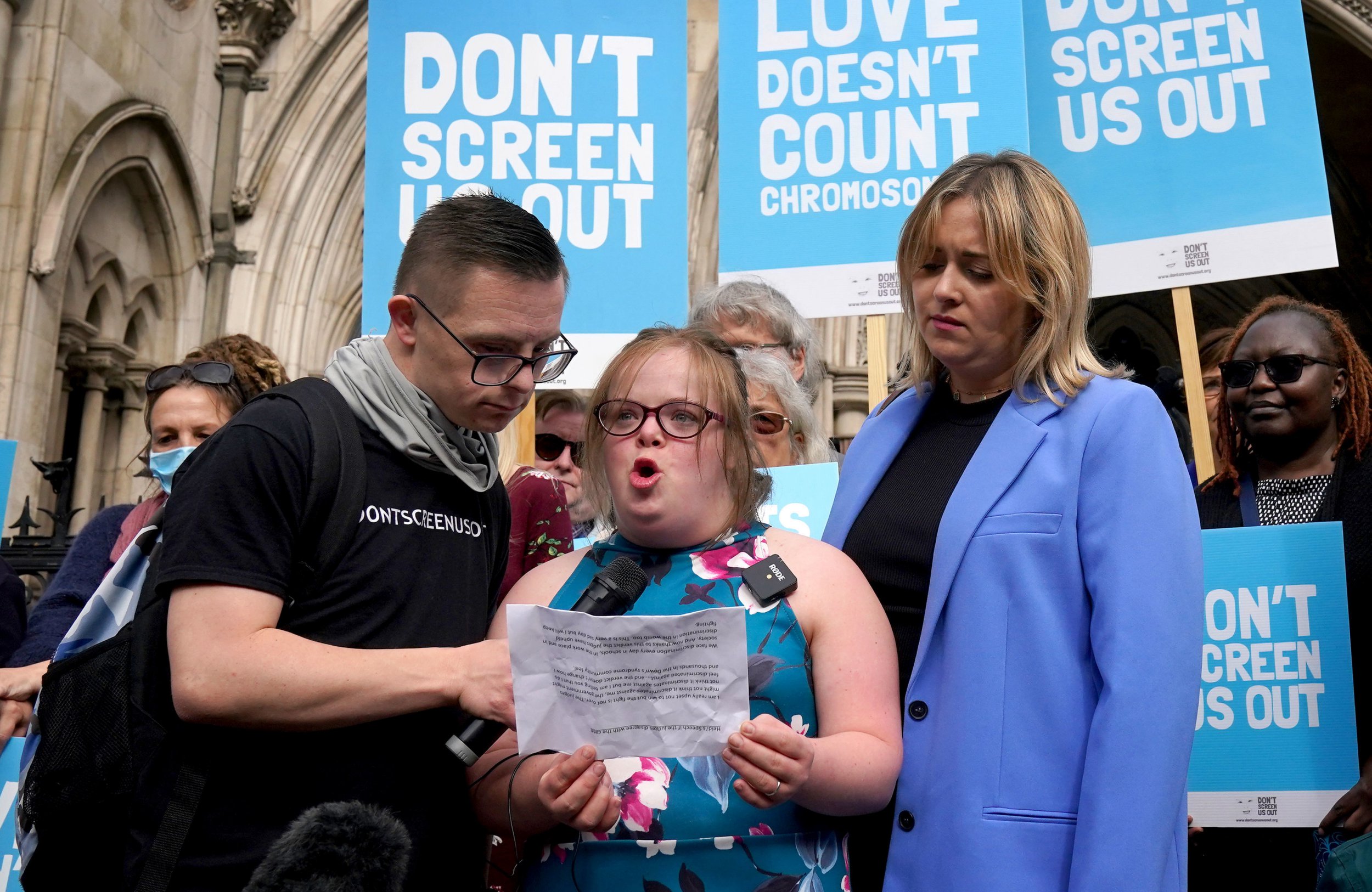 A woman with Down’s syndrome has lost a Court of Appeal challenge over legislation which allows the abortion of babies with the condition up until birth.

Heidi Crowter, 27, from Coventry, brought legal action against the Department of Health and Social Care in the hope of removing a section of the Abortion Act she believes to be an ‘instance of inequality’.

Judges ruled last September that the legislation is not unlawful and aims to strike a balance between the rights of the unborn child and of women.

The case was reconsidered by the Court of Appeal at a hearing in July.

In England, Wales and Scotland, there is a 24-week time limit on having an abortion.

But the law allows terminations up until birth if there is ‘a substantial risk that if the child were born it would suffer from such physical or mental abnormalities as to be seriously handicapped’, which includes Down’s syndrome.

Jason Coppell KC, representing Ms Crowter and Maire Lea-Wilson, the mother of Aidan, a young boy with Down’s syndrome, told the court in July: ‘Its effect is to stereotype life as a disabled, or seriously handicapped, person as not worth living and certainly as having less value than life as an able-bodied person, thereby impacting on the feelings of self-worth and self-confidence of disabled persons, such as Ms Crowter.’

He said the language used in the Act is ‘outmoded’ and considered by some to be offensive and unacceptable.

But, in a ruling on Friday, three senior judges dismissed the appeal.

In a summary of the decision, by Lord Justice Underhill, Lady Justice Thirlwall and Lord Justice Peter Jackson, the judges said the Act does not interfere with the rights of the ‘living disabled’.

They said: ‘The court recognises that many people with Down’s syndrome and other disabilities will be upset and offended by the fact that a diagnosis of serious disability during pregnancy is treated by the law as a justification for termination, and that they may regard it as implying that their own lives are of lesser value.

‘But it holds that a perception that that is what the law implies is not by itself enough to give rise to an interference with Article 8 rights (to private and family life, enshrined in the European Convention on Human Rights).’

Down’s syndrome, a result of being born by chance with an extra chromosome, results in some level of disability – with some people able to be independent and hold a job, while others will need more regular care.

In their ruling last year, Lord Justice Singh and Mrs Justice Lieven concluded that the legislation is a matter for Parliament, which can take account of a range of views, rather than the courts.

Speaking outside the Royal Courts of Justice in London after the ruling, Ms Crowter said she may now take her case to the Supreme Court.

She told reporters: ‘I am very upset not to win again, but I will keep on fighting because we have already informed and changed hearts and minds and changed people’s opinions about the law.

‘I am very upset that babies with Down’s syndrome can be aborted up to birth.

‘This tells me that I am not valued and of much less value than a person without Down’s syndrome.

‘I am angry that the judges say that my feelings don’t matter. That makes me feel that I am not as valuable as a person without Down’s syndrome.

‘We want to thank everyone who has donated their time and money to our court case.’