We’re covering charges against President Trump, a step toward mass vaccinations in Indonesia and young fishing enthusiasts in Paris. 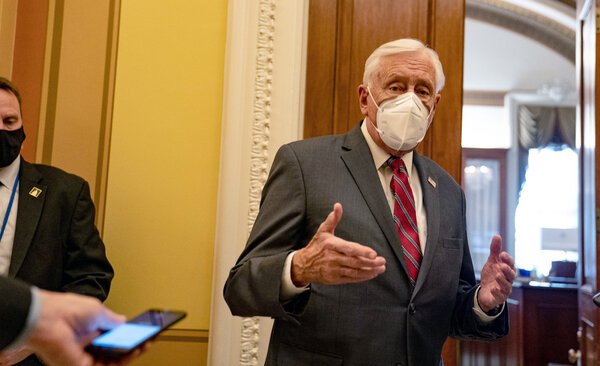 An impeachment charge against Trump

Democrats in the House of Representatives initiated an effort to impeach President Trump for inciting a mob that attacked the Capitol last week. A vote on the measure could happen as early as Wednesday.

The article of impeachment was introduced after Republicans blocked a move to formally call on Vice President Mike Pence to strip Mr. Trump of power. “The president’s threat to America is urgent, and so too will be our action,” Nancy Pelosi, the speaker of the House, said.

Some called for the House to delay sending the case to the Senate for trial until after President-elect Joe Biden has had a chance to fill his cabinet and pass coronavirus relief legislation.

A Senate trial would prevent Mr. Trump from holding office in the future, constitutional experts say.

Details: Read the article of impeachment, which charges Mr. Trump with “high crimes and misdemeanors” and with “inciting violence against the government of the United States.”

Recap: Our reporters looked at how several failures led to the attack on the Capitol. Here’s a look at how the mob moved through the normally heavily guarded area.

Looking ahead: Mr. Biden plans to call on Americans to come together at a time of political crisis and a pandemic with an “America United” theme for his inauguration next week. Separately, several groups and lawmakers are pushing for an overhaul of ethics laws not seen in decades in response to Mr. Trump.

Indonesia on Monday authorized emergency use of a Covid-19 vaccine made by Sinovac, a private Chinese company, after trials showed it had an efficacy rate of 65.3 percent. Mass vaccinations will begin in the country in the coming weeks.

The government has ordered vaccines from several companies, but plans to rely mostly on Sinovac, which has already delivered three million doses. In a possible signal of acceptance in the world’s largest Muslim majority nation, the Sinovac vaccine was declared “holy and halal” last week by Indonesia’s top Muslim clerical body.

Another boost to China’s vaccine in Asia came when the Philippines said that it had secured 25 million doses of the Sinovac vaccine, with the first 50,000 doses set to arrive by February.

Context: The efficacy rate from the trials in Indonesia was lower than those in Brazil and Turkey because the trials were made up of members of the public, instead of health care workers or others from high-risk groups. A higher number of people who are infected would raise the efficacy rate, according to Indonesia’s National Committee for Drug Assessment.

Here are the latest updates and maps of the pandemic.

The health care system in Britain is facing “the worst weeks of this pandemic,” the chief medical officer said. Hospitalizations in England have already far surpassed the spring’s peak.

Russian scientists have begun a study to determine whether they can speed up the country’s vaccination drive by providing only a single dose of its normally two-dose vaccine.

A sleepy island has become a base for the search and recovery operation following the crash on Saturday of Sriwijaya Air Flight 182 with 62 people onboard. Our reporters visited Lancang Island, which normally has few visitors, as diving teams extracted wreckage from the water.

The crash site is less than a mile from the island’s mangroves, coconut and banana trees. When the airplane fell into the sea, it was so close to the island that it rattled windows. In the fishing community, it’s déjà vu for some, after two other passenger planes crashed into the Java Sea in just the past six years.

Details: Lancang is part of the Thousand Island chain that has become vulnerable to rising sea levels and the kind of extreme storms that delayed the Sriwijaya flight before takeoff.

If you have 5 minutes, this is worth it

As the Jan. 23 anniversary of Wuhan’s lockdown draws closer, China has stepped up efforts to hide missteps. In recent weeks, the government has deployed censors to scrub the internet of critical coverage of Wuhan, where the coronavirus is believed to have originated.

Propaganda agencies are pushing feel-good videos depicting a city reborn, downplaying people’s grief and anger. The assertive rebranding campaign is a sign that China’s leaders have little interest in dwelling on the past or revisiting their mistakes, experts say.

Here’s what else is happening

Taiwan’s new passport: In the redesigned travel document, Taiwan’s official name, Republic of China, appears in a smaller font, while the words “Taiwan Passport” appear in large bold type. The government said that it was an attempt to lessen confusion during the coronavirus outbreak. The Chinese state-run newspaper Global Times warned of an “avalanche” from Beijing in response.

Yemen: The United States is planning to designate the Houthi rebels as a foreign terrorist organization, a move that could complicate the delivery of humanitarian aid in a country already on the brink of famine.

From Opinion: Amelia Pang, a journalist, reflected on her Uighur roots. “The reason no one in my family speaks Uighur, or celebrates any Uighur holidays, is because we are the fruitful result of China’s decades-long forced assimilation campaigns,” she writes.

Snapshot: Above, students fishing on the Seine. The ultimate aim of the day’s catch is not to share a meal with friends and family, but to share on social media images of the pikes, perches, zanders and catfish — and then release them back into the river. They make up a new fishing scene in Paris.

‘Sex and the City’ revival: HBO Max announced a return of the hit show about four friends navigating career and love struggles in New York City. The series will be called “And Just Like That …” and will feature three of the four original characters.

What we’re reading: This Associated Press article about a Missouri woman believed to be the last Civil War widow, who died recently. “This blew my mind,” says Amelia Nierenberg, who writes the Coronavirus Schools Briefing.

Now, a break from the news

Cook: This hearty pan of sticky, honey mustard-glazed sausages, brussels sprouts and potatoes only adds to the argument that sheet-pan dinners make the best weeknight meals.

Do: A kettle is equal parts kitchen workhorse and decorative accessory. So choosing one isn’t just a matter of finding something that can boil water. Here are some tips.

It’s easier to stay active with our At Home collection of ideas on what to read, cook, watch and do while staying safe at home.

And now for the Back Story on …

Breaking away from Trump

A number of businesses and other prominent institutions have disassociated themselves from President Trump since his supporters stormed the Capitol last week. Here’s a round-up of some that are making the shift.

The P.G.A. of America

Four of the country’s largest banks, JPMorgan Chase, Goldman Sachs, Citigroup and Morgan Stanley, said they would temporarily stop sending donations from their political action committees. The banks have raised hundreds of thousands of dollars and donated to candidates of both parties.

One of the nation’s largest federations of insurance companies, providing health care to about 109 million Americans, announced that it was suspending political contributions to Republicans in Congress who tried to block the electoral vote tallies for President-elect Joe Biden.

That’s it for this briefing. See you next time.

Thank you
Carole Landry helped write this briefing. Theodore Kim and Jahaan Singh provided the break from the news. You can reach the team at [email protected]

P.S.
• We’re listening to “The Daily.” Our latest episode looks at the coronavirus variant and the vaccine rollout in the U.S.
• Here’s our Mini Crossword, and a clue: Venice’s Grand ___ (five letters). You can find all our puzzles here.
• Our politics reporter Astead Herndon spoke to The New Yorker about covering the Georgia elections and the Republican Party’s “wake-up call.”